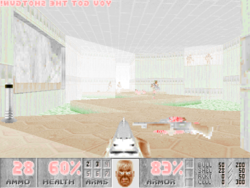 mooDDoom or MooDDooM is a modified version of Knee-Deep in the Dead in which practically all resources (excluding the status bar) are reversed. It was released on 6 August 2003 by Owen "Sarge Baldy" Lloyd. The WAD contains an internal DeHackEd lump; as a result, the author suggests playing it under a Boom-compatible port.

The WAD was not accepted to the idgames archive due to its use of maps initially created by id Software, which in Ty Halderman's opinion were not significantly different from the originals to justify their inclusion.

The maps were interesting to a number of players due to their novelty value; however, many were frustrated by the reversed palette, and some users preferred to remove it before playing.