Revision as of 13:39, 30 July 2022 by Quasar (talk | contribs) (→‎Sister Resurrector: Pre-emptively archiving USgamer link as site is shutting down)
(diff) ← Older revision | Latest revision (diff) | Newer revision → (diff)
A checked version of this page, approved on 30 July 2022, was based on this revision. 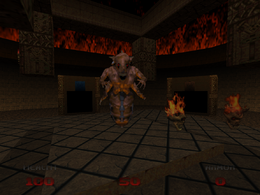 In The Lost Levels, the original Mother Demon's sister, the Sister Resurrector, banished the Doom marine from Hell and took his weapons, including the Unmaker and the Demon Keys. His quest involves fighting his way back into Hell to take revenge against her.[1] Occurring on MAP39: Final Judgement, the battle plays out similar to before, though here, the Demon Keys must be used to summon the Sister Resurrector into the fray of battle, and the keys themselves do not prevent the need to fight the rest of the monsters on the level. The monster itself is exactly the same in behavior as the original Mother Demon.