NeoDoom is a 32-map Doom II megawad made by Daniel Lemos for Doomsday and ZDoom. It has a load of new weapons (ZDoom only), monsters (different new monsters will be encountered depending on whether the wad is played with Doomsday or ZDoom), textures and music. The maps span from Tech bases, forests, beaches, cities, Egyptian temples and Hell. The monsters vary from monsters from the Monster Resource WAD to original incarnations of bosses and enemies from Hexen and Duke Nukem 3D. The weapons and inventory items are plentiful and are occasionally dropped by monsters, giving a sort of RPG feel to it.

This mod follows the traditional Doom mission story line, with 32 levels divided into three episodes. The first one has an industrial-like feeling, mostly with zombie human enemies, then, some passage levels will get the player to the second episode, played in a city. Finally, the last episode is made by various kinds of places, such as ancient temples, medieval castles, alien spaceships and Hell itself. The last secret level also has a special theme.

This was the first megawad that can be run on the most popular source ports until 2004: ZDoom, Doom Legacy and Doomsday Engine, and it also can run in source ports that have DeHackEd support. Nowadays, the main Doom scene is taken by ZDoom, GZDoom and Skulltag and their improvements, fact that requires a major update to this megawad. 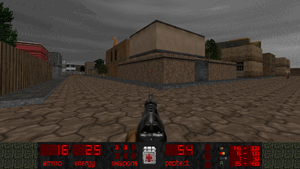 NeoDoom had mixed reviews from players. Many enjoyed the WAD for its level variety, powerful weapons and tough creatures. It is still played on cooperative on Zandronum servers. People criticized it for the maps being too "standard", and the amount of weapons and items making it too cumbersome. Doomers also complained about some of the monsters, mainly the Vixens, being too powerful. Many also criticized the mapset for the many stolen resources in use. Apart from the various criticism, the WAD is arguably considered one of the most important Doom mods of 2006.[citation needed]