Revision as of 17:04, 18 January 2021 by Xymph (talk | contribs) (→‎Appearance statistics: add appearance totals, fix a first appearance)
(diff) ← Older revision | Latest revision (diff) | Newer revision → (diff)
A checked version of this page, approved on 18 January 2021, was based on this revision. 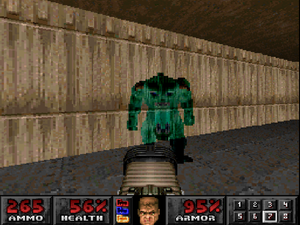 The Nightmare Spectre in the Sony PlayStation version of Doom.

The nightmare spectre is a tougher form of spectre found in the Sony PlayStation and Sega Saturn versions of Doom and Final Doom, having double the hit points of ordinary spectres and demons. It appears in the PlayStation games as a demon subtractively blended against the background graphics. In the Sega Saturn version, it is indistinguishable from a normal spectre except for the amount of damage it can take. It is officially described as follows:

In Sony PlayStation Doom, the nightmare spectre is first encountered on these maps:

The level groups contain the following numbers of nightmare spectres per skill level:

In PlayStation Final Doom, the nightmare spectre is first encountered on these maps:

The level groups contain the following numbers of nightmare spectres per skill level:

There are no nightmare spectres in the Plutonia episode. 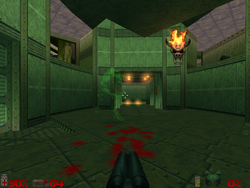 A nightmare spectre in the Doom 64 TC.
Retrieved from "https://doomwiki.org/w/index.php?title=Nightmare_spectre&oldid=250216"
Categories:
DoomWiki.org