Operation Overlord is a total conversion created by Nigel Rowand (Enjay), released in 2006 for the GZDoom source port. Containing a single level, the TC takes place on a beach full of enemy soldiers as the player is required to advance through enemy lines as part of an amphibious landing operation.

Operation Overlord received one of the 13th Annual Cacowards. A spiritual successor, BGPA Missions: Liberation, would be released two years later, in 2008.

The mod tells the story about a group of UAC marines fighting against a South American movement. The enemies you will encounter are "Incas" or "Incanese" and derived from a private total conversion, called Aspects. Befitting its name, the mod takes place in a D-Day style beach. 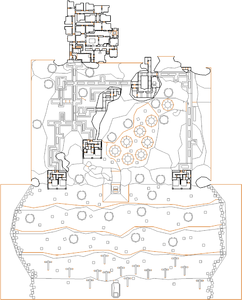 Map of Operation Overlord
Letters in italics refer to marked spots on the map. Sector, thing, and linedef numbers in boldface are secrets which count toward the end-of-level tally.

* The vertex count without the effect of node building is 4453.