Revision as of 14:27, 27 February 2013 by Quasar (talk | contribs) (Grammar, phrasing, and addressing some minor accuracy regressions. D'Sparil was left on Parthoris to rule it, therefore episode 3 must take place there. Heretic II is explicit about Silverspring.)
(diff) ← Older revision | Latest revision (diff) | Newer revision → (diff)
A checked version of this page, approved on 27 February 2013, was based on this revision. 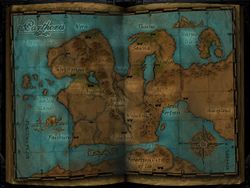 A map of Parthoris as seen in Heretic II

Parthoris is the fictional world depicted in Heretic. It is noted as the home of the elvish Sidhe race, of whom Corvus, the protagonist of Heretic, is a member.

Parthoris was invaded by the Serpent Riders, who corrupted the other races of Parthoris into their service and turned them against the Sidhe. When attacked, the Sidhe elders blew out their mystic candles, destroying the armies of the Seven Nations. This caused D'Sparil, the lone Serpent Rider left behind to rule Parthoris until its doom, to retaliate with genocidal warfare.

After Corvus's defeat of D'Sparil and his wanderings in the outer worlds, Parthoris was again burdened with strife. In Heretic II, a Seraph named Morcalavin unintentionally fell under the lingering influence of D'Sparil by using a False Tome of Power in an attempt to ascend to immortality. He unleashed a devastating magical plague which drove most of the world's inhabitants mad with bloodlust.

Much more of Parthoris is revealed in Heretic II than could be observed in the original game; only the first and third episodes of the original game were clearly indicated to take place on Parthoris. City of the Damned, which while a city of originally unknown name in the original game, is later identified with Silverspring, the city in which Heretic II begins. Its terrain is seen to include vast oceans, swamps, deep canyons, dark caves, high mountain ranges, and sprawling unexplored wastelands.

Amongst the diverse races living on Parthoris, aside from the Sidhe, are the amphibian Ssithra, the insectile T'chekrik, and the dwarf-like Ogles.