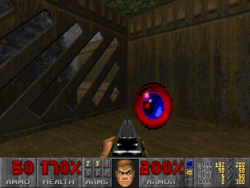 A blur artifact sits in the tower behind the yellow door in E1M3: Toxin Refinery. 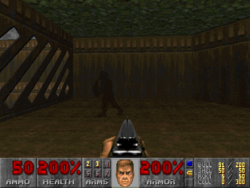 A partially invisible player as seen by another player (in multiplayer mode) on E1M3: Toxin Refinery.
This article is about the power-up in the classic Doom series. For other versions of this item, see:

A partial invisibility powerup (called blur sphere in the manuals) is a powerup that is first introduced in E1M3: Toxin Refinery from the Knee-Deep in the Dead episode of Doom. In that game and in Doom II it appears as a floating red and blue orb with a pulsing eye-like pattern, whereas in Doom 64 it is purely red with a fast-moving electric pattern.

Picking up this powerup will grant the player partial invisibility for 60 seconds. The player's sprite (in multiplayer mode) will appear similar to that of the spectre, while the affected player will see their own weapons and hands as partially invisible. When five seconds remain, the weapon will begin blinking, signaling the end of the artifact's effects; the player sprite however remains fully blurred until all 60 seconds elapse. Picking up another partial invisibility item while a previously collected one is still active resets the duration to 60 seconds; any surplus time is lost. For this reason it is best to not collect another sphere until the current one is about to expire.

Monsters firing upon an affected player will have their accuracy reduced, in that their aim is horizontally offset by a random angle, causing them to miss more often. Missile attacks receive a random offset of ±22.5°, while the random offset received by hitscan attacks is ±45°. Note than the hitscan attacks of monsters already have a built-in spread of ±22.5°, which means that those attacks aimed at partially invisible player get scattered up to ±67.5° in a random direction on the horizontal plane. This however may cause more experienced players to inadvertently dodge toward incoming projectiles, being accustomed to monsters firing directly forward. Nevertheless, a blur sphere confers a definite advantage against long-range hitscan attacks such as those of zombies or spiderdemons. The partial invisibility is unable to disrupt monster melee attacks, homing missiles, or the arch-vile's flame attack.

Partial invisibility can also be invoked with the cheat code idbeholdi.

In -altdeath mode, partial invisibility and invulnerability spheres do not respawn. Some source ports allow flags to be set to cause them to respawn. 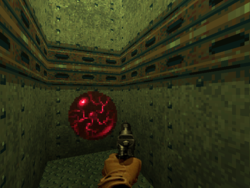 A partial invisibility found in a secret in Doom 64 MAP03: Main Engineering.

In the IWADs the partial invisibility is first encountered on these maps per skill level:

The IWADs contain the following numbers of partial invisibilities per skill level:

Other games and ports

Due to difficulty in rendering the effect, all partial invisibility spheres were removed from the Atari Jaguar map set, and all other ports using its map set do not contain any instances of this powerup in those maps. Most were replaced with soul spheres.

The Sony PlayStation version restored the powerup to its vanilla appearance but, as with spectres, it applies translucency to the player's sprite and weapons. However, it was not added back to maps which were adapted from the Jaguar version. In the Ultimate Doom episode, the powerup only occurs in levels beginning with MAP26: Sever the Wicked. It appears as normal throughout the Doom II episode. It can also be found as usual in all episodes of the PlayStation Final Doom.

The Sega Saturn version retains the powerup and effect from the PlayStation version, but re-implements it using a stipple pattern due to the system's lack of hardware blending support. When displayed on a typical 1997-era CRT television set with an analog input signal, this effect was largely indistinguishable from actual translucency.

The Super NES version of Doom retains the powerup for players, but like the PlayStation version applies translucency using the Super Nintendo PPU's hardware layer blending capability. At the same time however, it does not retain spectres as enemies, since they cannot be drawn on a separate layer in the same way as a player's weapon, and the Super FX blitter's capabilities do not include the ability to blend individual elements of the screen against an existing background within the same layer. The Super Nintendo version makes the powerup more powerful: unawakened enemies will not see the player at all unless approached at melee range or if they take damage from an attack.

Doom 64's partial invisibility item has the appearance of a dark red sphere with a central core emitting multiple electric arcs. Like the PlayStation version, the marine will appear slightly translucent.

There is an invisibility powerup in Doom 3, appearing chiefly in multiplayer. It has no effect on monsters, only rendering the player translucent.