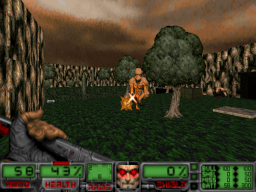 A phage firing at the player.

The phage is an enemy from Hacx. This large mutant is one of the game's most common enemies.

Phages will fire three orange orbs at the player. These orbs do not deal major damage, but taking all three together will still make quite a dent. Their secondary attack consists of jumping on their target when it is close to them, dealing damage. With 150 hit points, they are easy to destroy. They often assist thugs and androids in assaulting the player. Microtel-boosted kicks and cryogun blasts are particularly effective.

There also exists a variant of this foe disguised as either a mummy or a skeleton. Shooting the corpse will activate it. It behaves identically to the normal phage, but has 105 hit points.