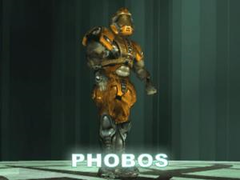 Phobos as he appears in his introductory cutscene.

Phobos is one of three Doom space marine characters who first appears in id Software's Quake III Arena, and reprises his role in Quake Live. He uses the same model as the Doom character, but with a distinctive orange skin versus the normal neon green. He is described as follows:

"An experienced veteran, he led the invasion of the demon-haunted tunnels of Phobos. There, he was betrayed by superiors who thought they could learn more from watching him die than by studying his reports."
― Quake III Arena manual

Phobos is a powerful warrior in top physical condition. He is the third opponent faced in Quake 3's single player progression. He may use the rocket launcher, but prefers the shotgun and lightning gun. He likes to use the latter two weapons up close and personal, and will attempt to close range rapidly.