Revision as of 07:50, 13 May 2022 by Gauss (talk | contribs) (→‎Tactical analysis: Minor rewrite)
(diff) ← Older revision | Latest revision (diff) | Newer revision → (diff)
A checked version of this page, approved on 13 May 2022, was based on this revision.
This article is about the weapon in Doom 3. For other versions of this weapon, see: 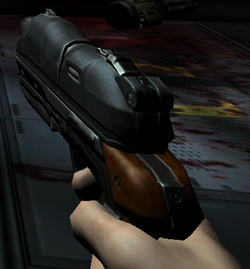 This weapon is considerably more powerful than the classic pistol, but often seems weaker as several of the weaker monsters have been "beefed up" compared to their classic counterparts. It is best used to conserve ammo or as a backup weapon for when stronger weapons get close to emptying their magazines. Headshots inflict more damage than body shots.

While the machine gun is far more effective at close and medium range, the pistol is more accurate at long range and will give better performance when fighting enemies at a distance. It is also a worthy weapon against trites and ticks, being able to kill one in two bullets, and against lost souls and forgotten ones if the user's aim is reliable; the pistol is also adequate against zombies. But when these come closer, swap to something more powerful.

While the pistol, machine gun and chaingun all technically fire bullets, they do not share the same ammo pool as in earlier and later Doom games.