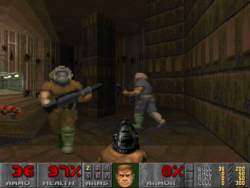 Since the game is played from a first person perspective, a player does not see his or her sprite on the main portion of the screen, except for a hand or two when certain weapons are selected or used.

In Doom and Doom II, the player stands for an unnamed battle hardened-marine sent to Mars for a violent response against an irresponsible commander (see Doomguy), while in other Doom engine based games it is a particular character fitting the corresponding background story.

A player spawns with 100% health, a pistol, and 50 bullets. The fists may also be used as a weapon. In Hexen, on the other hand, the player's attributes depend on the chosen character class. When respawning after being killed, all acquired items (such as armor, non-default weapons, ammo, power-ups, and keys) is lost. In deathmatch mode, one exception is made to this, as players always spawn with all the keys.