Difference between revisions of "Possessed security"

This article is about the monster in Doom (2016). For other games, see: 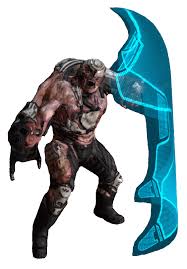 The possessed security are the most advanced form of the possessed which occur in Doom (2016), created from members of the UAC special forces unit NeoPhalanx which provided military defense for the UAC's remote colonies. These possessed uniquely display use of complex battle strategies and are capable of making advances with their powered energy shields while firing in defilade. When pressed, they may drop their shield in order to be more accurate with their firearms. They carry the standard issue DS-117 UAC shotgun and shield of all NeoPhalanx units. They are most comparable to the Z-Sec zombies of Doom 3, and the shotgun guy of the classic Doom series.

Possessed security units are the most difficult possessed enemies. They are identical to possessed soldiers, but their plasma guns behave like hitscan plasma shotguns instead (uniquely making them the only hitscan enemies in the game), and they use a large, transparent energy shield in combat, which they stay behind as they advance towards the player's position. If the player gets too close, they will use a shield bash that briefly stuns the player, at which time they may either withdraw to a better position or follow up with a (probably lethal) barrage of shotgun fire.

While the shield can be destroyed with sustained weapons fire, doing so is usually a waste of time and ammunition -- they can reactivate it within a couple seconds.

Their shields make them frustratingly difficult to kill, especially since they can still fire their shotgun over the side of it. The simplest way to deal with them is to use the chainsaw, which can kill them through their shields. Alternatively, the rocket launcher's remote detonation mod can be used to hit them with splash damage once the rocket has passed behind them, while the plasma rifle's stun bomb mod will shut down the shield on a successful stun. Frag grenades are similarly effective if well thrown. They may also lower their shields to aim their shots more accurately, but this is uncommon and not easily exploited.