Difference between revisions of "Possessed worker" 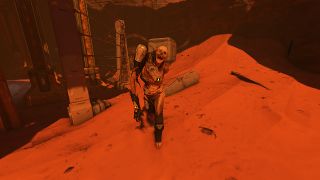 Possessed workers are the weakest class of possessed. They are completely mindless and simply shuffle toward the player, aiming to batter them to death. Parts of their uniforms are melting into their flesh. A major difference from the possessed scientist is the still mostly intact skull with a melted face, versus the scientist's hollowed-out eyes. They are completely unchallenging and essentially only serve to be fodder for glory kills and the player's pistol. Like the possessed scientist, they can easily be prepped for a glory kill by a weapon bash. They may sometimes engage in combat with imps.