Difference between revisions of "Puzzle item" 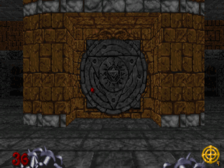 The books must be returned to the library in Gibbet. The target shelf differs from the others by having a brown mask attached to its top. By examining the shelf carefully, an imperfect line of books, similar to those found earlier, can be seen to spell K R X. Since Daemon Codex has the letter O in its back and Liber Oscura has the letter A consistently, they need to be placed into the gaps in the line so that it starts to spell K O R A X. When it does, many of the bookshelves lower, one of which reveals yet another puzzle item, Yorick’s Skull.

In the east of the center area in Gibbet, there is a pillar hall with some stained glass decorations. A headless statue is standing in the room’s northern end. If the player has solved the book puzzle, he should possess the item that is required. By inserting Yorick’s Skull into the statue, the player triggers an earthquake which collapses the floor of the pillar hall. However, the area under an open sky remains normal, providing a route for the player to exit. The water level of the pool in the center area has lowered, uncovering the teleportation device to a new level, Effluvium.

Yorick's Skull is a reference to the scene in Shakespeare's Hamlet where the titular character contemplates mortality while brooding over the skull of a jester named Yorick.[1] In an early beta of Hexen, the puzzle item was originally a human skull to be placed in the statue's hand for it to look at. The most likely reason for the change to the decapitated statue of the release version would be to provide a clearer visual hint towards the puzzle's solution.

The Spoiler Center - Walkthrough of Hexen