Difference between revisions of "Raptor: Call of the Shadows" 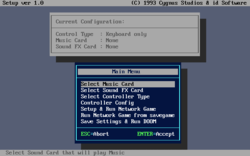 Raptor: Call of the Shadows is a vertical scrolling shoot 'em up developed by Cygnus Studios (now known as Mountain King Studios) and released early 1994, several months after the first release of Doom.

The game has some loose technical connections to Doom: Doom's setup program appears to have been derived from the setup program written for Raptor. Early versions of the setup tool included copyright attribution to Cygnus Studios at the top of the screen.

Raptor is also notable for being the only known game not using the Doom engine to have used the DMX sound library developed by Paul Radek.

Updated versions of the game are still being sold today.