Difference between revisions of "Realistic map" 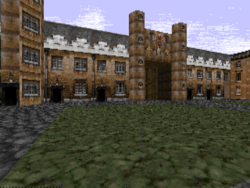 A realistic map is a map which attempts to simulate a real location or a realistic place as close as possible, as opposed to the rather abstract style, exhibited e.g. by the original Doom maps. Realistic maps are often the first maps of beginner mappers. They are usually shunned by the community, since most of them are low-quality (see Problems, below). However, there are realistic maps that have gained some respect.

The first problem with realistic maps comes from the Doom engine limitations, when compared to engines like "Build" of Duke Nukem 3D, which was created for the very purpose of making realistic maps. Most typical elements of architecture are impossible to reconstruct accurately; they always are blocky. The lack of 3D floors makes it impossible to create completely realistic buildings. Another problem is the lack of appriopate textures; those available in Doom are fit for technical bases, gothic castles and hellish landscapes of the original, but not for e.g. a city, which usually forces the designer to import his own textures if he is to achieve good results.

Another problem is that such maps usually have bad gameplay. Real-life buildings aren't constructed with the purpose of being used for a Doom map. Many of realistic maps have long, bland corridors with doors that lead to several identical, non-interconnected rooms; going through all such rooms will annoy the player.

[T]he fact is that most real-life locations are poorly suited to serve as game environments. A variety of factors conspire against the level designer that seeks to use actual buildings and spaces in a simulation, but the primary issue is that most real world locations are not designed to be played in, making for an unmemorable experience. (Gamasutra, "Educational Feature: A History and Analysis of Level Design in 3D Computer Games"[1])

Originally, Doom was supposed to have realistic maps; the Doom Bible contained detailed descriptions of scenarios that were to appear in the game. Tom Hall studied real military bases to create realistic locations, such as "Recreation and Training Center" and "Supply Depot Two". He built several levels, but as they were constructed and placed in the game, the others found them banal and uninspiring. Hall's levels were mostly flat and square, like Wolfenstein 3D, and decorated with real-life wallpapers, floor tiles and office equipment. To show off the game engine's capabilities, John Romero instead began creating levels that were more abstract. The team settled for Romero's less realistic but more vivid style, which is found throughout the game's first episode, Knee-Deep in the Dead.