Difference between revisions of "Reaver" 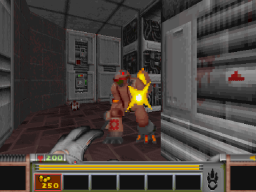 A Reaver robot fires his blaster at the player in Strife

Reavers are an enemy in the game Strife. They are humanoid robots that have 150 hit points and carry a small blaster which is like a double strength pistol, and can slash at close range. They explode when they die, dealing damage to all nearby characters, including the player. They do not care about alarms, attacking even if one is not activated, so it is important to always be on guard for them. Destroying a Reaver alerts nearby enemies to the player's presence.