Difference between revisions of "Revenant"

A revenant on the move in Level 6: The Crusher, in Doom II.
This article is about the monster in the classic Doom series. For other games, see:

Revenants are monsters introduced in Doom II that are easily recognized by their high-pitched shriek. They take the form of very tall animated skeletons in silver metal body armor equipped with shoulder-mounted missile launchers, and blood and gore running down their legs. Their running movements are a herky-jerky approach akin to a stringed puppet. They are officially described as follows:

"Apparently when a demon dies, they pick him up, dust him off, wire him some combat gear, and send him back into battle. No rest for the wicked, eh? You wish your missiles did what his can do."
― Doom II instruction manual [source]

A revenant emits a loud, high-pitched, hollow scream when spotting the player.

Revenants fire two varieties of missiles, unguided and homing. The homing missiles can be distinguished by a gray smoke trail. During melee combat they can also strike a blow with one of their large fists, complete with an exaggerated punching sound effect. Revenants have a unique characteristic unlike any other monster that has a melee attack: when the distance to its target is less than 196 units, the revenant abandons its missile attack completely and attempts to close to melee range; if attacked and hurt however, it will still immediately counter-attack with a single missile.

When killed, a few of the revenant's bones will shatter and the monster will simply fall on its back, one of the cleanest monster deaths the player will come across.

The revenant's missiles are powerful and when homing, particularly hard to dodge when out in the open. Fortunately, the pain chance of a revenant is high, so a chaingun will generally suffice against a single monster, preventing it from attacking. Two solid blasts from the super shotgun will reliably kill a revenant. It is advisable for the player to keep moving in order to avoid distant missiles, and if pillars, walls, or other obstacles are available, then they will be useful as barriers for stopping homing missiles. The homing missiles are very difficult to outrun, but if the player is able to strafe to the side and then forward just before being hit, the projectile may not be able to come around again. This tactic is especially useful if the player has backed up against a wall, as the missile will impact the wall before it has a chance to orbit for another pass. Another way to dodge them is for the player to slide behind an obstacle or around a corner.

The revenant's missiles are uniquely spawned 16 units above the center of its body, in order to accommodate for its shoulder-mounted launchers. This makes the demon capable of firing over obstacles behind which the player might otherwise be safe.

The revenant is fast on its feet, so players must be sure to keep their distance. If they do not, the melee attack of the revenant delivers a fiendishly powerful blow that can easily crush the player with a few hits.

For players with good movement skills however, the knowledge of the revenant's unique melee strategy (see above) can be abused to render them essentially harmless at close range. Berserk punching is effective, and can fell a revenant with as few as two hits. Still, because there is always a danger of the revenant retaliating with a missile, tackling them in melee is strongly discouraged for novice players.

On harder difficulties, they are often found in large groups, especially out in the open. When fighting groups of these towering skeletons, it is useful to use a plasma gun, the BFG9000 or a rocket launcher.

In monster infighting, revenants excel in ranged and positional combat, especially if the terrain restricts their opponent's movement or ranged attack efficiency, while their homing projectiles will reliably score hits over long distances and across height differences. At close range however, they fare substantially worse due to their low health and high pain chance; a mancubus or Hell knight, for instance, can waste a revenant fairly easily. 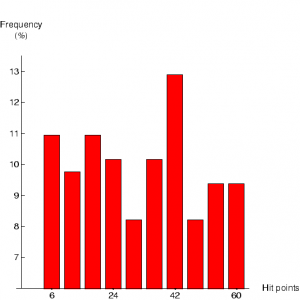 Damage done by a revenant's punch

Damage done by a revenant's missile

In the IWADs the revenant is first encountered on these maps per skill level:

The IWADs contain the following numbers of revenants per skill level:

Of the maps covered on the Doom Wiki, the following have the highest numbers of revenants in single-player:

In Doom RPG, the revenant appears as a class of monster. There are three variations, in order of power, identified by color:

Revenant-class monsters explode when killed and cause damage to any adjacent player, monsters, or barrels. They are weak against rockets.

References in other games[edit]