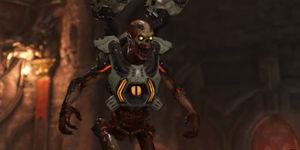 A revenant.
This article is about the monster in Doom Eternal. For other games, see:

The revenant returns as a monster in Doom Eternal, retaining its appearance from Doom (2016), albeit slightly modified: its eyeballs now glow green, it lacks blood on its forehead, new cybernetics are present on its head and neck, its mouth shape is a bit different, and its metal parts are now cleaner in appearance, similar to the classic revenant. It is currently presumed that it will have statistics and behaviors which mostly match those from the previous game, but further information from id Software is needed.

One particular revenant, referred to by VEGA as a revenant drone, can be player-controlled in order to obtain the super shotgun.

As seen in the game play reveal, the revenant can also be player-controlled in the Demon Invasion and Battlemode game modes.

The original Revenant program was shut down following the collapse of the UAC's Mars facility, but UAC cultists on Earth were able to restart the production of Revenants for their infernal masters.

The revenant's existing weapon systems are largely unchanged, but it has received new modifications in the form of signalling systems connected to its frontal lobes. When the signal is activated, the revenant descends into a frenzy in which it single-mindedly seeks to destroy the living.