Similar to the original Revenant, the Revenant in Doom 3 is a tall skeleton-like demon armed with a pair of shoulder-mounted missile launchers that fire relatively slow-moving homing missiles. Revenants first appear in Monorail Skybridge: Facility Transport (also known as Recycling Sector 1). They are some of the game's more elite demon enemies, possessing good weapons and about twice as much health as a Imp or Wraith. Revenants are typically encountered individually or (uncommonly) in pairs, although they sometimes are accompanied by other demon enemies such as Imps or Z-Sec soldiers. Although not as common as more average demons such as Imps or Wraiths, several Revenants can still appear within a single level. They are especially common in the Resurrection of Evil levels.

There are several differences between the Doom 3 Revenant and the original version. Firstly, their body below the collarbone is covered in a layer of almost transparent skin. This skin was originally a textural test in which id Software was trying to recreate an accurate skeleton by measuring it to the "flesh line". However, when they saw the creature in action with this test texture, they thought it looked interesting, and never removed it from the model; secondly, it has glowing green eyes unlike its older counterpart and has no gore attached to its legs; thirdly, it has thicker, more advanced chest armor, which resembles the marine's chest armor, but is colored red and has more tubes and wires along with the shoulder-mounted launchers. 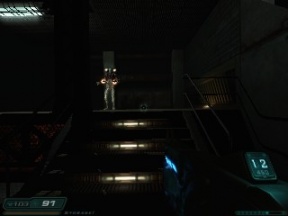 The Doom 3 Revenant keeps the concept of a missile launching-armored-walking skeleton, but it moves a lot slower than the original, walking instead of running, but it is also much more aggressive as a result, often firing both of its shoulder-mounted launchers at once as it walks towards the player's position. It will also use a punch/clawing attack at close range. Like the Z-Sec soldiers, Revenants can occasionally sidestep a single step to dodge the player's fire.

They have 272 health, which is a strange amount to have, as most other monsters have an amount of health that is rounded to the nearest five. The Revenant is also the only demon that cannot be "explained" scientifically. It has no visible internal organs and unless every organic system is contained inside its metal shoulder plates, it must be completely controlled by the powers of hell.

The shoulder missiles were originally going to drop missile ammo for you to pick up (and were also rumored to be actual weapons that the player could wield and guide the fired missiles), but for unknown reasons that concept was abandoned for the finished game.

The Revenant makes a distinctive croaking sound, even when it is unaware of the player, making it easy to tell when it is in the area. It often hides in hidden compartments with trigger points and darkened dead ends.

The Revenant's missiles are actually quite weak compared to the ones in Doom II. On the other hand, they travel in rather confusing patterns, tending to wobble and spiral as though their guidance sensor isn't quite on the nose, making it less straightforward to hit them. When using the Plasma gun against the Revenant, the projectile's wide "collision area" makes it rather easy to blast the missiles and damage the Revenant with a single burst.

A single double-barreled shotgun blast in the head at point-blank range will kill one instantly (Resurrection of Evil only). It is possible, but not reliable, to kill the Revenant with a single conventional shotgun blast aimed at its neck or the center of the clavicle. This is most likely to work if the attack is during its scream when it first recognizes the player and has its head leaning forward. The Machine Gun is also partially effective, although it takes some time and dodging. The Chaingun and Plasma Gun are the most effective weapons at long range. The Chainsaw is also highly effective against the monster, although the player will still take a few hits from its close-range punching attacks. The BFG is not recommended because of the likelihood that the projectile will hit the Revenant's missile in flight, not to mention it is a waste of ammunition to use the weapon on these enemies.

Firing from cover is very helpful when fighting Revenants, as the player can dodge behind cover when the missiles come close, allowing them to impact harmlessly against the object used as a hideout. The homing missiles can also be dodged by sprint-strafing diagonally forward, although this takes some practice to perform and requires enough space to maneuver. Be very careful around flammable and explosive barrels (common in the Recycling sectors) as they can be detonated by both direct hits and splash damage from the missiles.