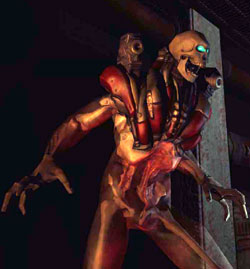 Its missiles travel in rather confusing patterns, and are also quite slow moving with homing capabilities, making it less straightforward to hit them, but if players use the Plasma gun against the Revenant, it is usually rather easy to blast the missiles and damage the Revenant with a single volley. A single double-barreled shotgun blast in the head at point-blank range will kill one instantly (Resurrection of Evil only). The Chainsaw is also highly effective against the monster.