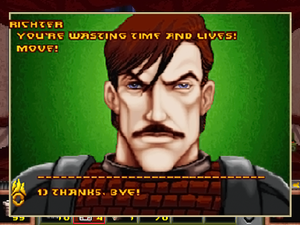 Richter is a character in Strife. He is the leader of a powerful faction within the Front. The impression is given by the dialogue that Richter coordinates most of the Front's daily military operations, while Macil acts as more of a visible leader. The player interacts with Richter briefly in the commons where he provides the player with needed information.

He is voiced by Peter Morgan (IMDb).

After Macil is revealed to be possessed by a spectre, and subsequently destroyed by the player, Richter assumes Macil's role as the commander of the Front. It will happen in both plot branches once the player has killed the Bishop, whether or not Macil or the Oracle is the next target. In the better plot branch (in which the Oracle is killed first), Richter has a much larger role as he sends the player to the catacombs to retake the key that unlocks the mines next to the Acolyte factory. He is worried about his agents who have not returned from the catacombs and believes that there is something inhuman down there.