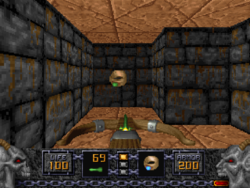 The Ring of Invincibility in a secret area in Heretic E1M2: The Dungeons, with the ring also displayed in the player's inventory. 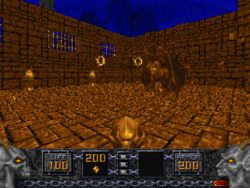 The gold-tinted vision while the ring is in effect.

The invulnerability colormap bug can be seen while using this artifact in vanilla Heretic.

In the IWADs the ring of invincibility is first encountered on these maps per skill level:

The IWADs contain the following numbers of rings of invincibility per skill level: