Difference between revisions of "Rocket launcher" 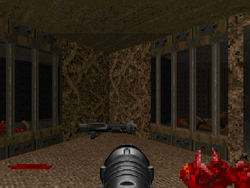 A player, holding a rocket launcher, finds another one in a secret area of MAP06: The Crusher from Doom II. 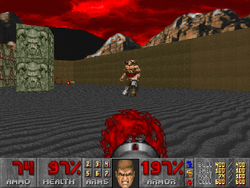 A rocket-to-rocket battle with the cyberdemon on E2M8: Tower of Babel.
This article is about the weapon in the classic Doom series. For other versions of this weapon, see:

The rocket launcher is used to fire rockets, missiles that fly in a straight line and explode when they hit anything solid. When picked up, the launcher contains two rockets (four at the I'm Too Young To Die and Nightmare! skill levels).

The launcher first appears in a secret area of the level E1M3: Toxin Refinery and appears again in secret areas of the following three levels. It is finally found in a non-secret area on E1M7: Computer Station.

Each rocket does 20-160 points of damage, in round multiples of 20, plus a maximum blast radius of 128 units. Thus the rocket launcher is approximately as powerful as the super shotgun, but equally effective at long range and with a more rapid rate of fire.

It can be used for rocket jumping in some areas, for example to reach the secret exit of E3M6: Mt. Erebus. 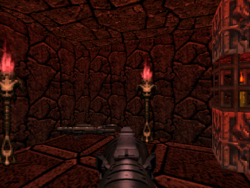 The rocket launcher can inflict enormous damage against groups of monsters, and is often the preferred weapon for dealing with particularly tough monsters when energy cells are low. The rocket launcher can also conserve ammo due to its splash damage which can deliver (roughly) the same damage to a large number of targets given that they are all close together in proximity to the rocket's blast. However, when using the rocket launcher at close range or within a confined structure, great care must be taken to avoid the effects of blast damage (even a player with 200% health and armor can be killed by several such accidents). For this reason, using a rocket launcher around lost souls or pain elementals is hazardous. Novice players may also be caught off guard by the weapon's horizontal auto-aiming which sometimes causes a rocket to be launched a few degrees away from center. 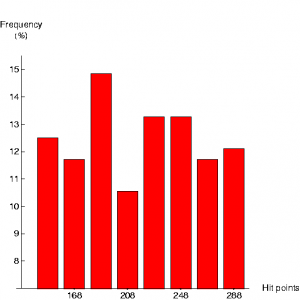 Damage done by a rocket impact (direct hit plus blast) 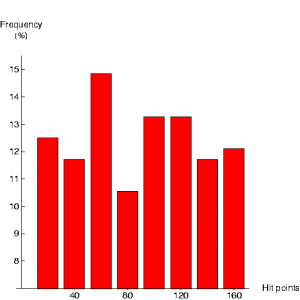 Damage done by a rocket impact (direct hit only)

In the IWADs the rocket launcher is first encountered on these maps per skill level:

The IWADs contain the following numbers of rocket launchers per skill level: