STR05: Twilight (Stronghold: On the Edge of Chaos)

STR05: Twilight is the fifth map of Stronghold: On the Edge of Chaos. It was designed by Daniel Gimmer (Tormentor667) and uses a custom music track. 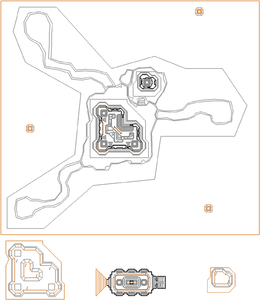 Map of Twilight
Letters in italics refer to marked spots on the map. Sector, thing, and linedef numbers in boldface are secrets which count toward the end-of-level tally.

You start facing a building that contains the deadline, as well as the weapon, ammo and health pads; the powerup pad is in a smaller building behind you. The buildings are on a tall peak surrounded by a rectangular pit; falling into the pit is not harmful and there are teleporters on the west, north-east and south-east sides that will put you back on the peak.

This level mainly uses flying enemies; be prepared to drop into the pit to chase demons that have flown out of range, but do not spend too long there as unattended demons can reach the deadline very quickly. Pay attention to lost souls if they get close to the deadline, as when they charge at you they can end up flying straight through the deadline, ending the mission.

A shotgun and shells can be found in the center of the level.

* The vertex count without the effect of node building is 2342.