STR13: Inferno (Stronghold: On the Edge of Chaos)

STR13: Inferno is the thirteenth map of Stronghold: On the Edge of Chaos. It was designed by Brett Harrell (Mechadon) and Daniel Gimmer (Tormentor667), and uses a custom music track. 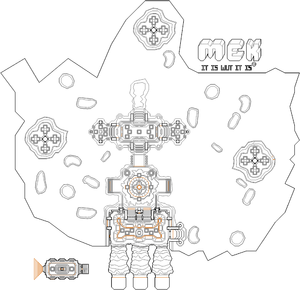 Map of Inferno
Letters in italics refer to marked spots on the map. Sector, thing, and linedef numbers in boldface are secrets which count toward the end-of-level tally.

You start in an open area near the center of the level - the deadline is the green circular pad in this middle of this area, and the four item pads can be found around it. The bars blocking access to the south side of the level will open just before the first wave starts, while the bars leading to the north side will open later on.

As with most Deadline levels, prioritize the demon-type enemies first as they will quickly reach the deadline if left unchecked. A smart bomb powerup will appear on the south side of the level just before wave nine starts - it can destroy monsters over a wide radius but can easily kill players as well.

A shotgun and two boxes of shotgun shells are placed in front of player one as the level starts.

There is a red skull switch in the south-west corner of the level - press it to open a door to the east, then quickly run through the door before it closes to find a quad damage powerup.

* The vertex count without the effect of node building is 7673.