STR17: Slaughtered (Stronghold: On the Edge of Chaos)

STR17: Slaughtered is the seventeenth map of Stronghold: On the Edge of Chaos. It was designed by Gianluca Cilento (Remmirath) and uses a custom music track. 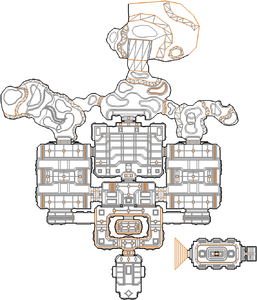 Map of Slaughtered
Letters in italics refer to marked spots on the map. Sector, thing, and linedef numbers in boldface are secrets which count toward the end-of-level tally.

You start in a circular red passage that contains all four item pads; the core is across a bridge behind you. A chamber containing a shotgun and a box of shotgun shells can be found in the center of this passage; north of this chamber is a window that you can drop through to reach the floor below, along with a jump pad to help you restock between waves.

* The vertex count without the effect of node building is 8321.