STR34: Three Ways to Die (Stronghold: On the Edge of Chaos)

STR34: Three Ways to Die is the thirty-fourth map of Stronghold: On the Edge of Chaos. It was designed by Daniel Gimmer (Tormentor667) and uses a custom music track. 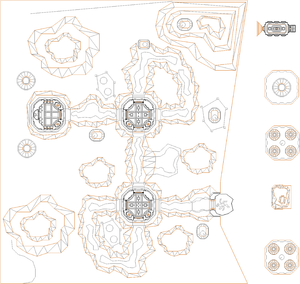 Map of Three Ways to Die
Letters in italics refer to marked spots on the map. Sector, thing, and linedef numbers in boldface are secrets which count toward the end-of-level tally.

No extra weapons or ammo are provided at the start of this level; consider using a random weapon powerup to give yourself something stronger than the pistol. If you cannot kill monsters on their first pass through each building, wait for them to loop round and kill them on their second pass. Be careful when teleporting between the buildings in later waves, as you risk teleporting straight into a room full of aggressive monsters.

Head due north from building two until you reach a small structure - there is a green access disk sitting here next to a marine corpse. The disk can be used in the main hub to unlock STR56: Phobos Anomaly.

* The vertex count without the effect of node building is 6581.