Difference between revisions of "Screecher" 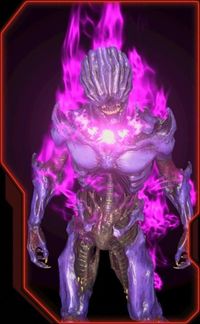 The screecher as it appears in the Codex

The screecher is a monster introduced in The Ancient Gods, Part Two. It is a variant of the Hell zombie identifiable by its purple aura.

On their own screechers are no more dangerous than regular zombies, but when killed they unleash a scream that empowers all other demons in the area, making them stronger, faster and harder to kill for a short time. When a screecher is killed, a prompt is displayed on screen and all affected demons will radiate a purple aura.

Screechers are immune to the flame belch and cannot be chainsawed. When all other demons in an area are killed, the screechers will die off automatically.

Screechers were human worshippers of a cult called Ra'Itha Va'Tuum, but instead of being rewarded they were instead tortured in the Citadel of Anguish for millennia. Frustration at being deceived caused them to mutate, turning their screams of anger into an intoxicating power desired by all other demons.