Difference between revisions of "Seraphim" 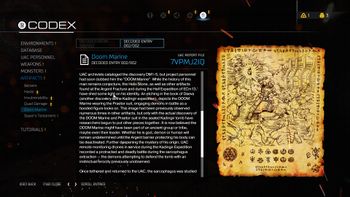 The Seraphim is an entity or a group of entities mentioned in the lore of Doom (2016) about which little is currently known. One detail known for certain is that it or they are opposed to the forces of Hell: they are said to have gifted the Doom Slayer with super-human powers of speed and strength. Seraphim are described as a high ranking and powerful caste of angels in the mythologies of Abrahamic religions, naturally opposing demons.

Little information can be extracted from a few entries in the codex. Among these is a picture (an etching from the "Book of Daeva") that is speculated to contain an image of a Seraph in the upper left corner. This mysterious figure, or one much like it, appears again in the box art for Doom Eternal.

If this picture is indeed of the Seraphim, then it is depicted as some kind of heavenly figure watching over a battle of the Doom Slayer and some Night Sentinels. It is unclear if this battle took place still in defense of Argent D'Nur or was part of the early stages of the Doom Slayer's campaign in Hell. It has been noted that the ramparts in the background of the scene bear an architectural similarity to structures found in Sentinel Prime.

Cited from the Slayer's Testament III

"In his crusade, the seraphim bestowed upon him terrible power and speed, and with his might he crushed the obsidian pillars of the Blood Temples."
― Lord of the Fourth Age of Hell

Written in the Slayer's Testament I

"Burned by the embers of Armageddon, his soul blistered by the fires of Hell and tainted beyond ascension, he chose the path of perpetual torment."
― Lord of the Fourth Age of Hell

It is stated that the Slayer's soul was "beyond ascension." Later in the Testament it is also written that "[the Doom Slayer] wore the crown of the Night Sentinels..." This offers a few distinct possibilities:

There is not currently enough information available to further investigate possible connections between the Seraphim, the Night Sentinels, the Wraiths, and the angelic figure from Doom Eternal's trailer known as Khan Maykr. Further research will have to wait until the release of Doom Eternal.