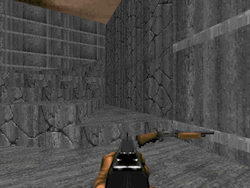 One of many shotguns in DM1.WAD from Maximum Doom. 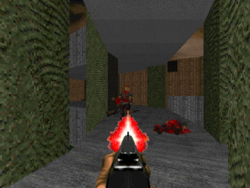 The shotgun being used on Level 11: 'O' of Destruction!

The pump-action single-barrel shotgun is one of the most versatile and useful weapons in the Doom player's arsenal. It is first found in a secret area of E1M1: Hangar (or possibly taken from a former human sergeant on the upper two skill levels), then in a non-secret area on E1M2: Nuclear Plant.

A shotgun contains 8 shells when picked up (16 shells on the "I'm too young to die" and "Nightmare!" skill levels). Shotguns looted from the corpses of shotgun wielding zombies contain 4 shells (8 on ITYTD and NM) and, unlike pre-existing shotguns, disappear when crushed beneath doors or moving ceilings.

The player's shotgun fires seven pellets, each of which inflicts 5-15 points of damage (for a total of 35-105 points of damage per shot), provided that all pellets connect against the target. Each pellet has the same random directional offset as a pistol shot, which gives an aggregate horizontal spread between 2.2° and 9.8° (the average is 5.9°, and the standard deviation 1.5°). Unlike the super shotgun of Doom II, which spreads pellets in a rough cone, there is no vertical dispersal; presumably this was a consequence of the game engine's predominantly planar design.

The shotgun packs a deadly punch at close range, and the grouping of the pellets is tight enough to make the weapon useful for medium-range attacks. In a pinch, the shotgun can be used for sniping, though the spread of the pellets makes it hard to do much damage at long range.

Packs of weaker enemies are particularly vulnerable to shotgun fire, and it is often possible to kill two or more zombiemen or shotgun guys with a single shot. It should usually kill an imp with a well-aimed blast or a demon in two, but this is often not the case. Against tougher enemies, such as cacodemons, it is usually best to lunge forward and fire at short range, then dodge the enemy's attacks while reloading. This tactic works well when combined with circle strafing.

The shotgun is considered a light-medium weapon, stronger than the fists or pistols, so it is generally good for dealing with small groups of humanoids, and the occasional tough monster scattered in mazes. For riot control, say large crowds of former humans, imps, demons, or several hell knights and cacodemons, it is better to use available weapons with greater firepower such as the plasma gun and rocket launcher; for Doom II the super shotgun is perhaps the best alternative since there is no splash damage and because it draws from the plentiful shell ammo pool.

The shotgun's main disadvantages are the slow rate of reloading (which can leave the player vulnerable to counterattacks, especially in tight corridors), the pellet spread which weakens it at long range and the fact that the gun is difficult to use against tougher enemies such as a Baron of Hell for inexperienced players. However, these problems are less extreme than for the super shotgun. If shells are the only plentiful ammo, the shotgun is less wasteful and fires faster if one needs to snipe or deal with lone humanoids scattered in mazes. 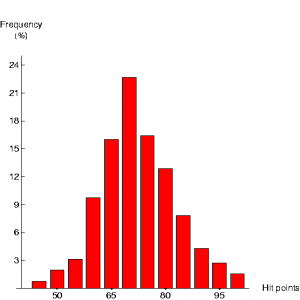 Damage done by a shotgun attack

The IWADs contain the following numbers of shotguns (excluding those of dead shotgun guys):