Difference between revisions of "Skulltag" 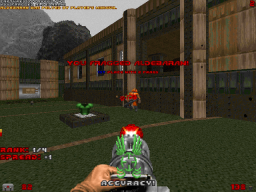 A bot eats lead
Skulltag is a source port by Brad "Carnevil" Carney, based on ZDoom with network code derived from Quake 2. Its gameplay has been described essentially as a hybrid of Quake 3: Arena and Doom.

Influenced by Quake III Arena and Unreal Tournament, Skulltag's multiplayer mode includes game modes including Deathmatch, Cooperative, Instagib, and Last Man Standing. There are also several Teamplay modes, such as Capture the Flag, One Flag Capture the Flag, Team Deathmatch, Team Last Man Standing, Team Instagib, and so on. In the nameship game mode, Skulltag, players capture the enemy's "skull" and take it to a skull pillar where they get points, similar to Capture the Flag. Before 0.97b, the player did not need both skulls to score; afterwards, the enemy player's skull needed to be in their home base before a player could score at a skull pillar.

Redone in version 0.97c, Skulltag includes deathmatch bot players that can be used in online servers or offline skirmishes. They do not perform well in other game modes, however. Bots have personalities and chat phrases based on their status (winning, hurt, killed, and so forth). And some of the bot's name's are based off of greek gods, such as the bot Orion, and off of well-known modders around the entire Doom community, and reference's to the game's developers or otherwise.

The full set of Doom weapons are also available. All weapons may be placed in maps, summoned via the console, or given to players at the start of a Last Man Standing round. The weapons bunk with their respective Doom equivalents (i.e. the Railgun is in the same slot as the Plasma gun, and the Grenade Launcher is with the Rocket launcher). As a side note, this also shows that those weapons share the same form of ammunition used by their counterparts.

Turbosphere
Speeds up any player that picks it up. During the time the sphere is active, the player leaves behind after images in a similar manner to Hexen's Boots of Speed.
Time freeze sphere
Freezes everything in the map but the player who picked it up and his/her allies for a short period of time. This means everything: projectile weapons remain frozen in midair, for instance. Time unfreezes jerkily at first. The effect is easily mistaken for connection problems by the uninitiated.
Invisibility sphere
Makes the player translucent to the point where they are almost impossible to see, essentially being an enhanced version of the partial invisibility power-up. The sprites for the sphere come from the Doom pre-release beta, which essentially is the sprites for the partial invisibility sphere with the reds and blues swapped over.
Doomsphere
Multiplies the damage done by the player who picked it up by four for the spheres duration, similar to the quad damage powerup in the Quake series. While active, the player turns red as an indicator to others as well as having a saturated red screen.
Guardsphere
Reduces the damage done to the play by 75%. While active, the player turns green as an indicator to others as well as having a saturated green screen.
Random powerup
Rotates through the following: Invulnerability; Soulsphere; Megasphere; Turbosphere; Invisibility; Doomsphere; Guardsphere; Partial Invisibility; Time Freeze.
Terminator sphere
Only appears in the Terminator game type (but can be summoned during any other game mode with cheats enabled), where the sphere is central to the modes gameplay. When a player picks the sphere up, they are given full health and armor, similar to the Megasphere, as well as a permenant Doomsphere effect that doesn't affect the players vision. The Terminator sphere appears above the player that possesses it, making it visible to other players. When the player holding the sphere is killed, the sphere is dropped, allowing other players to pick it up.

The effect of a rune remains as long as the player is holding it. Players lose runes on death.

Aside from weapons, new monsters are available. They can be placed in any kind of Skulltag map, or summoned. They do not appear in any maps included in Skulltag (because it does not include new single player maps), but many PWADs use them.

Due to incorrect programming in the rendering code, all aspect ratios except 16:10 are displayed with distortion (as they are scaled, rather than cropped, from 16:10).