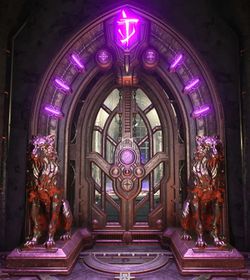 The gore nest behind a Slayer Gate.

The Slayer Gates are an element of Doom Eternal and its expansion, The Ancient Gods, Part One, consisting of a gate controlling access to an area containing a special purple gore nest. If the player pulls the organ out of the nest, they will be teleported to an enclosed area with a number of powerful demons that must all be destroyed. Slayer Gate combat encounters are more difficult than those in the regular level. A Slayer Gate cannot be opened unless the player finds the corresponding Slayer Key, which will be hidden somewhere in the gate's vicinity.

If the player succeeds in defeating all demons, they will return to the Slayer Gate and the nest will explode. In the main game, the player is rewarded with three weapon points and an Empyrean Key is left in the nest's place; six Empyrean Keys are required to unlock the Unmaykr in the Fortress of Doom. In The Ancient Gods, the player instead receives a support rune of their choosing.

The reason for the existence of the Slayer Gates and how they teleport the player to a different environment are not explained in-game. The environments within the Slayer Gates largely resemble the surroundings of Night Sentinel architecture, in particular, areas which are parts of Exultia, Sentinel Prime, and Taras Nabad. The inside areas behind the gates themselves also strongly resemble Sentinel Prime's architecture.

In Doom Eternal, Slayer Gates are found in these levels:

In Part One, Slayer Gates are found in the UAC Atlantica Facility and The Holt (the Blood Swamps level does not have a Slayer Gate, but a support rune is hidden in the level). Slayer Gates do not appear in The Ancient Gods, Part Two, and are replaced with gore nests that trigger Escalation Encounters when interacted with.