Difference between revisions of "Sony PlayStation" 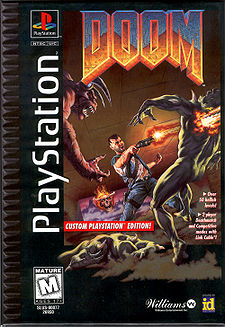 The game features a multiplayer mode, but lacks split-screen; two consoles have to be linked together instead. This makes the multiplayer truer to the original, but it was done at the sacrifice of accessibility.

John Romero is quoted on the back cover, calling this the "best DOOM yet," and is credited as "Creator of DOOM".

It was followed shortly by a port of Final Doom, reusing the same engine and most custom resources. 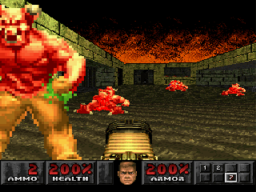 A screenshot from the PlayStation version of Doom.

The original Doom levels are based on the Jaguar version, and therefore, as with all ports based on this version, the simplifications to the map geometry and texturing versus the PC version are carried over. The maps from Ultimate Doom's Episode 4 and Doom II contain similar, although less changes. Overall, this means that the number of unique textures per map is lower than in the PC version. Further examples of simplifications would be the omission of crushers in Ultimate Doom and the reduction of large vertical heights. These changes are done mainly for performance reasons; however, there is still noticeable slowdown in certain levels, particularly when playing on the higher difficulty settings.

The game features fewer enemies compared to the PC version:

Uniquely to the PSX and Saturn ports, monsters from Doom II appear in Ultimate Doom levels, but only when the game is played on "Ultra Violence". Also, megaspheres can be found in the PSX/Saturn exclusive Ultimate Doom levels MAP29: Twilight Descends, MAP30: Threshold of Pain and MAP57: The Marshes, with the latter additionally featuring a super shotgun. A tougher type of spectre, the nightmare spectre, has been added. While the regular spectre looks like a partially invisible demon, the nightmare spectre is subtractively blended, and is harder to kill due to having twice the hit points of an ordinary spectre.