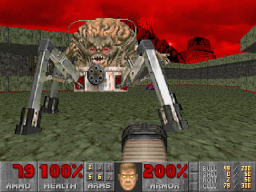 The Spider Mastermind is queen of the hill on E3M8: Dis
File:Map05 mastermind.png
First encounter in Doom II, on MAP06: The Crusher

The Spider Mastermind, also called the Spiderdemon, is the boss of Episode III of Doom ("Inferno") and Episode IV of Ultimate Doom ("Thy Flesh Consumed"). It has 3000 hit points and is one of the toughest creatures in the game. It is female. The Spiderdemon appears as a huge brain with facial features on it, mounted atop a cybernetic pod with four legs and a chaingun, making it similar to a spider.

File:General.gif
The chaingun's aspect is reminiscent of the typical Wolfenstein chaingun

The Spider Mastermind: You guess the Arachnotrons had to come from somewhere. Hi, mom. She doesn't have a plasma gun, so thank heaven for small favors. Instead, she has a super-chaingun. Crap.

The Spider Mastermind is not mentioned in the Doom game booklet, presumably to avoid a spoiler. Perhaps as a result of this, the game booklet for the Depths of Doom Trilogy erroneously states that she appears in Doom II only.

The Spider Mastermind is armed with a rotary gun that has the sound of the shotgun but with a spread similar to the player's chaingun; in fact, it is essentially an automatic version of the Sergeant's shotgun, firing three pellets per shot at a rate of 425 shots per minute, her chaingun is also much bigger than the player's chaingun. When a Spider Mastermind begins firing, she will not stop until her target moves out of her view or dies; or if she is stunned (causing her to move) or killed. Similar behavior can be observed with the Chaingunner and Arachnotron.

Cyberdemons and Spider Masterminds take only direct hit damage, and are immune to all blast damage. Therefore, a greater number of rockets is required to kill these bosses than might be expected.

The IWADs contain the following numbers of Spider Masterminds: