Revision as of 06:46, 6 December 2021 by Xymph (talk | contribs) (→‎Speedrunning: rm empty Misc section)
(diff) ← Older revision | Latest revision (diff) | Newer revision → (diff)
A checked version of this page, approved on 6 December 2021, was based on this revision.
This level occupies the map slot MAP01. For other maps which occupy this slot, see Category:MAP01.

Spidersilk is a single-level PWAD that requires a limit removing source port. It was designed by Zan-zan-zawa-veia (aka yakfak) and uses a new music track as a replacement.

It takes place in an underground dungeons inspired of Ultima Underworld, features some DeHackEd modifications and a new skill level called "Painful And Stupid" which acts as an alternate game mode. 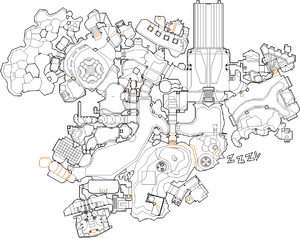 Map of Spidersilk
Letters in italics refer to marked spots on the map. Sector, thing, and linedef numbers in boldface are secrets which count toward the end-of-level tally.