Difference between revisions of "Stimpack" 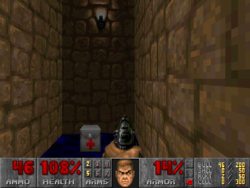 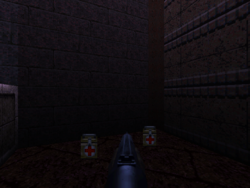 Two stimpacks in a corner in Doom 64 MAP14: Eye Of The Storm.

A stimpack is an item that appears as a small white (in Doom and Doom II) or brown (in Doom 64) box with a red cross. Picking one up will increase the player's health by 10% up to a maximum of 100%.