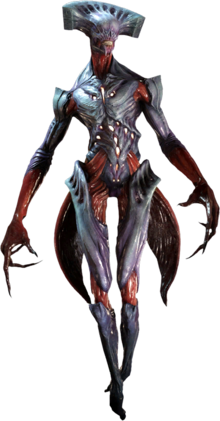 The summoner.
This article is about the monster in Doom (2016). For other games, see:

The summoner is a new demon from Doom (2016), inspired by the classic arch-vile. It is a tall, levitating, blueish-purple- and red-colored demon with a bony crown-like ring around the top of its head. When attacking, it takes on a pose reminiscent of the original monster, with its arms held up above its head in an arc, channeling energy through its hands. It has two insect-like elytra attached to its back.

Unlike the arch-vile from Doom 3, the summoner can continue to spawn demons rapidly until it is defeated. It will teleport around the area it appears in, using projectile attacks that deal medium to high amounts of damage to whatever it hits. It can summon every kind of standard enemy that has appeared up to that point in the game. Unless the player prefers the company of several Hell knights, it should be killed without hesitation. If there is a berserk power-up available or if enough chainsaw fuel is on hand, these are not at all overkill for use on it.

The UAC captured several summoners as part of the Lazarus Project's tethering expeditions. The summoner was difficult to subdue, requiring its Hell energy to be sapped on a continuous basis. Lazarus researchers described the demon as having a primarily defensive role dedicated to bringing other demons into the fray of battle. The summoner is capable of opening rifts to Hell in order to bring other demons to its own plane, and is also capable of sending them back, as this was noted as the most likely mechanism by which the UAC-created spectre was able to escape back to Hell and breed. UAC anatomical studies suggested that the summoner is a highly advanced form of the imp due to similarities in their mechanisms of attack.

While the Argent waves it uses to attack normally kill humans, a small number are instead transformed into Possessed. This does not seem to be a random process, and there is evidence that the Summoner intentionally selects the most resilient of its foes for conscription into the armies of Hell.

The summoner was known as the arch-vile in pre-release versions of the game, with all of its codex entries referring to it as such. This was changed very close to the game's release.