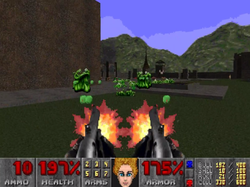 Dez wields dual shotguns against a brood of Fridge Things.

Surreal Killer is a weapon/monster replacement wad for GZDoom developed and released by Mike MacDee (Impie) in 2016. It is meant to enhance almost any map set, making Doom more surreal and more difficult. All of the new monsters are very aggressive, and feature enhanced versions of their original counterparts' attacks, or entirely new behavior; the new weapons and powerups are meant to balance these new abilities, since the stock Doom arsenal is ill-equipped to deal with them.

The mod features weapon and monster graphics from a variety of obscure first-person shooter games, and also several pieces of original art by Impie himself. 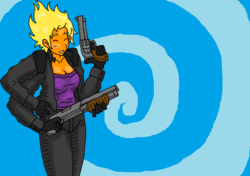 Dez poses on the intermission screen.

The player is Dez, a four-armed Fomorian babe who cheated to win a local sweepstakes: the grand prize was the Funkbot 8000, which immediately runs amok the moment Dez turns it on, distorting reality everywhere it goes. Dez now must find and destroy Funkbot 8000 before it ruins the space-time continuum.

As a gameplay mod, the story quickly becomes irrelevant during play, depending on the map set. However, given the mod's surrealist overtones and space-time-distortion plot, this doesn't seem to matter.

Most of Dez's guns have normal and alternate firing modes; the alt fire modes are usually bizarre.

Punchtin'. Dez has four fists which punch in rapid succession.

Peacemaker. A powerful revolver that fires slowly and accurately, or can be fanned for rapid, inaccurate fire. Dez can wield two at a time (and fans both at once with her spare arms).

Lead Handshake. A shotgun that fires faster than the Doom shotgun, and can be fired like a rocket at the cost of 4 shells.

Akimbo Shottie. Dez wields two shotguns at once, either firing them one after the other or both at the same time.

Exploding Frisbee. Dez can throw one of these at a time, or four at once, to blast enemies to pieces.

Universal Remote. Can activate shootable switches, or deactivate large groups of enemies with a single click.

Phone-A-Phriend. Summons one of several allies to help/hinder Dez.

Buttmunch. A walking butt that spits disusting gobs at enemies. Very weak, but deals a lot of damage.

Bessie. A cow that stands there and does nothing. Dez can use it as cover until it dies.

CyberChook. A cyborg chicken with a railgun.

Jelly. A friendly blob monster with the same behavior as Fridge Thing. Sometimes its duplicates get confused and turn on Dez.

Spazzbot. A malfunctioning robo-dispenser that fires random projectiles and sometimes drops health bonuses instead of attacking.

Mr. Showbiz. An annoying color commentator who attacks by mouthing off at his enemies...literally.

Lumberjerk. A flying buzzsaw robot that identifies all living things as trees that need cutting down.

Messiah. Emits his own theme song while devastating monsters with a variety of magic attacks.

Rainbow Babe. Emits her own theme song while converting enemies to Dez's side with a powerful rainbow beam.

Duckhead. Replaces zombieman. A duck-headed soldier that moves extremely fast and attacks much more aggressively, sometimes spazzing out and emptying its magazine at Dez.

Obliterators. Replace shotgun guy and chaingunner. Maniacal mercenaries wearing gray or red armored suits. Their attacks are unchanged, but their increased health makes them more dangerous than their predecessors.

Mermaid. Replaces imp. A giggly reverse mermaid: legs of a woman, upper body of a shark. It prances nimbly after the player and spits bubbles at a distance; up close it devours him at a frightening rate.

Jersey Devil. Annoying replacement for lost soul. A strange red space-bat. Much easier to kill, but flutters about in an erratic pattern, making it very difficult to hit.

Ogler. Replaces cacodemon and is basically unchanged, except that it appears to be slightly faster. It resembles a Dungeons & Dragons beholder.

UberMosh. Replaces baron of Hell. A titanic version of Mosh that throws handfuls of devastating boulders high and low, so retreating to an elevated platform might not help you. The larger boulders are capable of killing in one or two hits.

Tommy the Cat. Replaces spectre. An unsettling cheshire cat face that levitates toward the player to devour him. Essentially a flying demon that is only visible from the front; from the back it completely vanishes.

Joliet Juggernaut. Replaces revenant. An escaped convict from outer space with a bad attitude. Hucks two revenant seekers at once, which fly faster than normal.

Atomic Dragon. Replaces mancubus. A big two-headed dragon. Fires twice as many fireballs in the same pattern, and explodes horrifically when killed: every frame of the explosion animation does radius damage to everything around it.

Fridge Thing. Replaces Hell knight. A green blob of slime that replicates when damaged, but each new set of blobs spits weaker projectiles. Its frequent appearance makes it extremely dangerous.

Demonic Spider. Replaces arachnotron. A cyborg spider that spoofs the trope of the same name: it moves almost as fast as the player and fires lasers which are impossible to outrun.

Varmint. Replaces Wolfenstein SS. A more maniacal version of Yosemite Sam who fires dual Peacemakers, and drops an extra one for Dez when he dies.

Funkbot 8000. Replaces spiderdemon. The most powerful monster in the mod: a giant robot that constantly emits funky music. The more damage it takes, the faster it moves, and the more aggressively it fires rockets at the player.