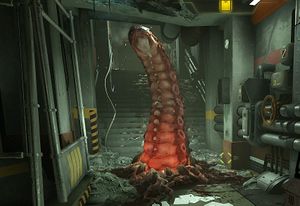 The tentacle is an ambient enemy featured in Doom Eternal. It appears in various levels, popping out of fleshy holes in the ground when the player comes near. Tentacles may also appear submerged beneath fluids such as the purple goo which covers portions of Hell and demonically corrupted areas elsewhere, where they cannot be easily anticipated.

A larger and more resilient variant of the tentacle appears in parts one and two of The Ancient Gods.

The tentacle lashes out for moderate damage when the player draws near, then dives back into its hole. After it pops out, it is vulnerable for a brief moment before it attacks, allowing the player to kill it in that time, especially with a burst weapon like the shotgun. Tentacles can be killed with the chainsaw or Crucible, unlike other ambient demons. Like the cueball, they cannot be stunned. They are weaker than any other demon except the lost soul, with 150 health.

Tentacles are a specific outgrowth of the more general phenomenon of Hellgrowth formations. These formations appeared throughout areas of Earth as Hell invaded and were intensely studied by ARC scientists. Hellgrowth is associated with atmospheric bio-contagens and organic hazards which are hostile to terrestrial life, and spreads in a chaotic, seemingly random structural pattern at a rate of cellular reproduction which may not be possible to contain.

Tentacles emerge from the Hellgrowth in swaths as defensive tendrils. Unlike the more vegetative portions of the growth, these tentacles are keenly aware of their environs and will attack anything perceived to be a threat to the Hellgrowth. They are capable of using their sharp thorns to disembowel victims.