Difference between revisions of "The Artifact"

This article is about the item found in Doom 3: Resurrection of Evil. For the items found in Heretic and Hexen, see Artifact. 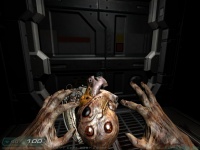 Hell's Artifact. Notice the corruption in the user's hands (this is only a visual effect and has no effect on the player).

The Artifact is the equivalent of the Soul Cube from Doom 3. It is a demonic heart-shaped device that was initially designed to aid the forces of Hell, but is used by the nameless Marine in Doom 3: Resurrection of Evil.

The Artifact uses human souls as opposed to demon ones, When used near human corpses, it charges up by absorbing souls.

The Artifact itself has no attack capability, but in some respects is far superior to the Soul Cube. It has the ability to give the player a period in which he becomes super fast, an unstoppable melee attack for a short period of time and temporary invulnerability. These abilities are unlocked each time the player defeats a Hell Hunter.

A human heart-shaped object with a large curved handle, you will gain this at the start of the game but it will be useless until you defeat the Hunter Helltime. Defeating the Berserker Hunter and Hunter Invulnerability causes the Artifact to gain their abilities as well. Helltime allows the player to move very fast, represented by time appearing to slow down to the point that enemies can not react to your movements. Berserker strengthens all weapons, including punches that can kill a Hell Knight or a Bruiser in one punch. Invulnerability is literally that. The Artifact is charged by human souls from corpses around the facility. Once more than two are discovered, the player cannot choose which one is activated. Instead, it activates all the powers currently unlocked at the same time, meaning someone with a charged Artifact later in the game has the potential to become a lightning fast, invulnerable death machine that can rip apart a Hell Knight with his bare hands.