The City of the Damned

Revision as of 09:37, 13 October 2022 by XymphBot (talk | contribs) (Automated edit - archive WA link)
(diff) ← Older revision | Latest revision (diff) | Newer revision → (diff)
A checked version of this page, approved on 13 October 2022, was based on this revision.
This article is about the Doom II mod. For the Heretic episode, see City of the Damned.
This level occupies the map slot MAP01. For other maps which occupy this slot, see Category:MAP01.

The City of the Damned is a single-level PWAD for Doom II that requires the ZDoom source port. It was designed by Daniel Gimmer (Tormentor667) in 2004, last updated in 2005, and uses an unnamed music track by Lexus Alyus. The par time defined in MAPINFO is 23:15. In 2020 it received a v2.0 update for GZDoom, and a sequel called The City of the Damned: Apocalypse was released in 2007.

The City of the Damned replaces the three normal keycards with three additional skull keys in the colors grey, green and purple. 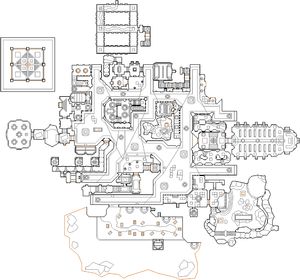 Map of The City of the Damned
Letters in italics refer to marked spots on the map. Sector, thing, and linedef numbers in boldface are secrets which count toward the end-of-level tally.

These statistics are for v1.3.

* The vertex count without the effect of node building is 9470.