The Shores of Hell 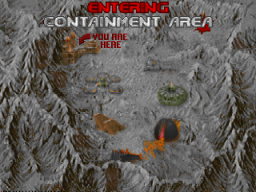 The intermission screen with a visual presentation of all the Shores of Hell levels.

The Shores of Hell is the second episode in Doom. All maps in this episode are credited to Sandy Petersen, though many of them were first started by Tom Hall. The episode is set on Deimos, which is being overrun and infested by the demonic forces. To show this, its levels generally resemble UAC facilities that have been partially altered by the demonic invaders. The sky used for the background consists of mountains against red clouds.

The Compet-n records for the episode are:

The new owners of Deimos build their lord's tower as the marine approaches it.
Retrieved from "https://doomwiki.org/w/index.php?title=The_Shores_of_Hell&oldid=70834"
Category:
DoomWiki.org