The Shores of Hell (Doom the Way id Did) 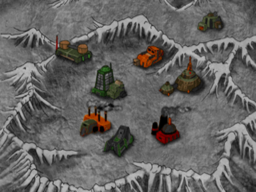 The intermission screen, showing a visual representation of all levels in the episode.

The Shores of Hell, named after its counterpart episode in Doom, is the second episode of Doom the Way id Did. As the project itself was designed to as an alternate-reality counterpart to Doom itself, this episode shares the original episode's name, theme, and story, returning the player to the lost Deimos base.

The records for the episode at the Doomed Speed Demos Archive are: