Tricks of the Game-Programming Gurus 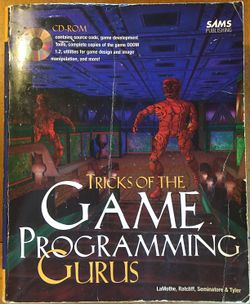 Tricks of the Game-Programming Gurus is a book written by André LaMothe, John Ratcliff, Mark Seminatore, and Denise Tyler, and published by Sams Publishing in July 1994. It is a 746-page introduction to game programming focused on C- and x86 assembly-language coding for PCs running MS-DOS. It is notable due to its strong focus on Doom as a design reference, being prominently billed as a gateway to creating one's own "Doom-like" games.

"Develop 3-D walk-through games, and discover how to add music, art, and multi-player capabilities to your programs with Tricks of the Game-Programming Gurus. You'll get all the tips, tricks, and advanced techniques from Professional Game Developers who have designed and programmed combat and war games, as well as game textures for walls, grounds, and skies. In no time, you'll master programming techniques and discover how to combine them to create spectacular, real-world games. Design an award-winning, action-packed game of your own with Tricks of the Game-Programming Gurus."
― Publisher's description

The book also contains a "Color Gallery" with sixteen pages of images which fall between pages 398 and 399. 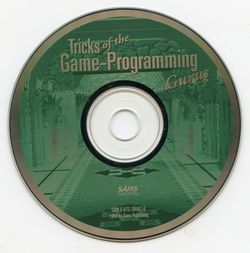 The book includes a CD-ROM with the following contents:

The book is primarily organized around an example program called Warlock and its corresponding WAREDIT editor tool, which are developed along with the reader in a piece-wise fashion when the book is followed front to back. This example game is similar to Wolfenstein 3D in technology.

Though Doom is prominently mentioned as a point of reference throughout the book, several key deficiencies exist in its content which place it well behind what was then the state of the art represented by Doom: