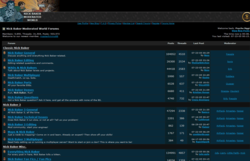 Doomworld Forums was rebranded "Nick Baker Moderated World" at the height of the drama.
"'Nick Bakery' is a term that was invented by (I believe) Darknation, which is used to describe the wacky antics of Nick 'NiGHTMARE' Baker."
― AgentSpork

Nickbakery, or Nick Bakery, is a Doom Community phrase meaning "nonsense", or, originally, a phrase describing an exaggerated action or actions taken while reacting to a situation (that no one really cares about) to the point of annoyance and inviting ridicule. Unfortunately, this involves an accomplished community member, Nick Baker (NiGHTMARE), and his reaction to a resource leak of Knee-Deep in ZDoom, which had been in development hell for years, and faced legal scrutiny from Todd Hollenshead of id Software.

The reaction of the community towards NiGHTMARE's attitude may be seen as harsh in retrospect, even going as far as Doomworld renaming itself to "Nick Baker's Moderated World" for a while, and could be described as an apex of Doom community drama.

While KDIZD was still in development in July 2005, a "cabal" of Doom community members conspired on IRC, for reasons unknown, to "attack the ZDoom". This was in dark response to the massive amount of "faux-hype" that the creators of KDIZD attempted to foster on Doomworld Forums and elsewhere, which they saw as obnoxious. Finally, one of them, codenamed "Dron", managed to get into the KDiZD development ftp, and quickly distributed all the files via IRC overnight.

The response the next morning was varied, from some who claimed their work was being seen too early, to some who vowed to quit the Doom modding scene altogether. NiGHTMARE then posted a thread on ZDoom Forums on July 19, 2005, warning the Doom community to never allow a person named "Dron" to work on Doom projects. This drama quickly spilled into other community forums, including Doomworld.

Given that KDIZD was a ZDoom project over on ZDoom Forums, many in the Doomworld community met the drama with indifference, with some ready to stir the pot. One forum user announced on IRC "a massive prize for photoshopped pictures depicting 'the nickbakery'".

It has widely been accepted that Darknation is the creator of the "nickbakery" term, through a very graphic fan-fiction he created just days after the leak. NiGHTMARE reacted predictably, with the response from Darknation being outright mockery. The two have been at odds ever since.

The Doom community had fun with the term for a few years, and was included in Diet 32in24 as an ad for a bakery, which claimed to sell "cockcakeodemons". Given that the drama is 10 years old, a shrinking number of people are left that remember the story, and even then, not very much of it, as most threads concerning the matter were scrubbed from existence.

Nickbakery as a term has distanced itself from the original drama, and is rarely mentioned today. Its meaning has shifted into a meaning not related to the original KDIZD leak drama as a community flavored stand-in word for "nonsense". In retrospect, that's all it was - nonsense.

A handful of Doom WADs have referenced this term.