Difference between revisions of "Vagary" 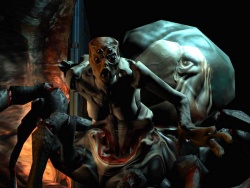 Vagary in Alpha Labs 4
Vagary is the first boss of Doom 3. She resembles a half spider woman with her lower body of that of a spider and her upper body is a woman's upper body. She is analogous to the Spider Mastermind in Classic Doom. However, unlike the Spider Mastermind, the Vagary is weak compared to the other bosses in Doom 3. Her attacks are simple melee and telekinesis. Her abdomen contains a malformed human fetus. Later on in the game, two more Vagaris are fought.

The Vagary also resembles Quake's Vore enemy since both resemble humanoid spiders; both are likely influenced by Driders, elf/spider hybrids in the Dungeons and Dragons universe.

When the player first meets Vagary, he should have picked up the chaingun not far behind. A prolonged chaingun salvo should send the spider packing in under a minute. It is also possible to use the plasma gun if you picked it up earlier in the level, as this will quickly deplete "her" health.

The second time the player meets Vagary, he should have the Soul Cube, and should be prepared to use it. This Vagary is apparently tougher than her original counterpart and can send boulders hurling towards you with her telekinesis. Best route of option is to use the Soul Cube and then either the chaingun, plasma gun or rocket launcher to finish her off. A BFG shot might be used for players seeking a quick end.

Vagary is usually accompanied by Trites, so the player should have a shotgun or machine gun handy ready to eliminate the swarm before tackling their mother (note: the Trites are a particular nuisance when using the Soul Cube, sometimes being targeted instead of Vagary, and the BFG, as they sometimes destroy the chip it fires before detonation)

In the Making of Doom 3 book, the equation "Sexy + Gross = Creepy" was used to describe the driving concept behind the Vagary.