VanillaDM, previously known as DOSBoxDoomNetplay - Quick Edition, is both a GUI launcher and a multiplayer utility made by Hypnotoad. It seeks to improve vanilla Doom multiplayer sessions when using the DOSBox MS-DOS emulator through a collection of tightly configured programs running underneath the VanillaDM GUI.

VanillaDM was first conceived on August 9, 2013 [1] and was then known as DOSBoxDoomNetplay - Quick Edition but it was then abandoned due to running into problems in working with Visual Studio. A second release followed a year later on August 20, 2014 in a Doomworld forums post, changing the name to its current iteration. The last and final released followed on September 30, 2014 in this post, mainly to fix an issue where people joining with a custom source port could not join. 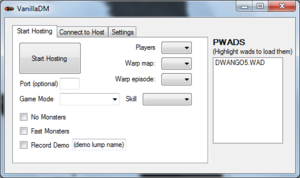 The opening screen of VanillaDM, showcasing the settings that can be modified before hosting a multiplayer game through vanilla Doom.

A Doom or Doom II IWAD needs to be placed in the DOOMIPX folder. You can then specify the parameters in the GUI if you are the host or connect to another host, using its IP address and VanillaDM then configures everything automatically. An additional settings page allows the user to further refine the settings of the DOSBox core. This greatly reduces the steps that needed to be undertaken to enable multiplayer, making the usage of DOSBox feel and act more like a proper source port.