Difference between revisions of "Wraith" 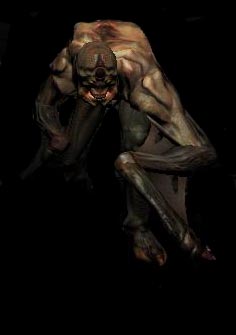 A Wraith from Doom 3

The Wraith is a monster in Doom 3 and the expansion pack. Wraiths crawl on the ground, can teleport and attack the player with falx-like hands. It can be easily mistaken for an Imp while it's being summoned. Unlike an Imp, a Wraith can crouch.

Wraiths cannot be killed while teleporting, but during reappearing and disappearing animations they can still be damaged.

It is a good idea to throw a grenade their way. Another good tactic is to wait for them to get close and eliminate them with the chainsaw or the shotgun. However, as with most demons, it is easily eliminated with the Machinegun.

In the Making of Doom 3 book, Id wanted the Wraith to form out of a cloud of insects, to hide in bodies and such, but it was scrapped since the player wouldn't even be able to tell what the cloud was in the dark environment.