This level occupies the map slot Z1M4. For other maps with a non-standard slot, see Category:Non-standard map slots. 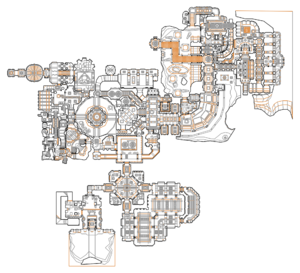 Leave the shuttle and take the shotgun, backpack and shotgun shells from the storage area in front of you, then head north through a door and go round the corner to an octagonal junction with imps, soul harvesters and rapid fire troopers. Head through the east doorway and go straight forward to a switch that will open the bars next to it, then step through to a chamber with another switch that is guarded by shotgun guys, chaingunners and a Hell warrior. Flip this switch then return to the octagonal chamber, where the north-east door has opened to reveal some radiation shielding suits; take one, then open the south-east door to find a radioactive water pool. Drop into the water and swim north-west to a power core, then press the switch on its north side - this will power the door leading to the main facility.

Return to the octagonal chamber and head through the now-unlocked north door, kill the imps across the bridge then take the shotgun and armor before heading north-east to an area with imps, dark imps and one or two Hell warriors. Enter the arched tunnel to the east and open the large door at the end, then follow the curved walkway past some more imps to a dark tunnel which you should follow to a grid bridge. Cross the bridge until you reach one or two imps guarding a switch, which will open a door on the floor below, then go back to the curved walkway where a chamber containing dark imps has opened. Follow the walkway back round to its west side (a Hell knight will spawn here) and open the small door in the north wall, then step on the lift in front of you to go down to an underground mine. Head north past some satyrs and soul harvesters until you walk under the bridge you used earlier, then head north-east to an open door and head down the stairs behind it.

Go round the corner at the bottom of the stairs to confront two dark imps then round another corner to find a bridge over a nukage trench. Step over the trench to kill a couple of imps, then follow the passage west and north to get on the bridge, cross it and follow the next passage until you reach a T-junction with signs for "Mining Shaft" and "Nukage Control". Turn left and go round the corner to a passage with colored columns until you reach a room with a large computer terminal in the middle, then head south to find several imps guarding the red keycard. With the red key, head north past the computer terminal until you reach a curved wall then step past it and head east into a tunnel with red and gray strips that is protected by shadows. Follow the tunnel all the way south to a room with dark imps, soul harvesters, a Hell warrior and a Hell knight then press the button in the north-west corner to open a door by the "Nukage Control" sign you passed earlier. Go back to that junction and walk through the now-open door to find the green keycard, as well as a button that will lower a pillar with the blue keycard elsewhere in the level.

Backtrack through the underground mine and return to the curved walkway, then head through the west door to return to an earlier part of the level. Head west into a room with blue floors and flip the switch in the south-west corner to lower the lift next to it. Ride the lift up and turn right to enter a circular area with green key doors, then open any of the doors to find the blue keycard inside the central building. Leave the building and head through the west door (requiring the blue key) then turn left to a chamber with dark imps and troopers; there is a red key door in the south-west corner which leads to a small maze. As soon as you enter the maze, face north to see a passage with a red teleporter pad and follow that passage until you reach a junction guarded by a mauler demon. Turn right and kill some demons ahead then head north and west past a chainsaw zombie to a larger room with more zombies. Head north through the room and go round the corner to find a button next to a blue key door; pressing the button raises a bridge in the next room.

Go through the door and kill the waiting imps and shadows, then turn right to find a staircase leading up to the bridge you just raised. Cross the bridge and open the door on the other side, then go through to an empty octagonal chamber - as you walk through the chamber you will be ambushed by two to four blood demons, and when they are killed they will be joined by two Hell knights. After killing the knights the west door will open; go through it and ride the lift up to a blue teleporter that you can step on to finish the level.

In the octagonal chamber near the start, open the north-west door to find a chaingun and two boxes of bullets. Watch out for a shotgun guy hiding behind the door.

After passing through the main facility door you will see a bridge over a nukage river. Drop into the nukage and follow it east to find an imp and shotgun guy guarding a switch; flip the switch then quickly step on the lift next to it to reach a rocket launcher.

From the hub in the middle of the level, head through the north-west doorway to find a tall room with several zombies. Step on the lift on the east side of the room and press the button to be carried up to a walkway with a megaarmor.

Thoroughly search the maze of passages in the south-west area to find a berserk pack.